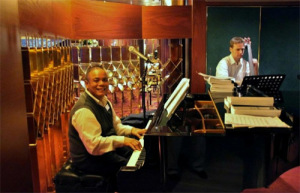 Ross Ariffin is an International Multi Award Winning Pianist, Music Producer & Composer. He was born in Malaysia in 1962 and began his piano classical studies at the tender age of eight. He won a scholarship to London, United Kingdom to study both the piano and the violin. Ross Ariffin travelled the United Kingdom and Europe performing with the British Youth Orchestra as a violinist as well as a solo concert pianist.

Upon his return to Malaysia in 1982, Ross joined the think ranks of the local music industry winning his first of four music awards at the Asian Broadcasting Union Golden Kite World Song Festival with his song Semalam Ku Tolak Ke Tepi and went to represent his country at the world level competition held in Kuala Lumpur. He has also won three other coveted Malaysian music awards for Best Movie Soundtrack, Best Pop Rock Song and Best Producer for local Malaysian artist Aishah in 1996 at Anugerah Industri Muzik or A.I.M. Malaysia. Ross Ariffin has performed with Holland America Line since late 2008.

Ross Ariffin is now regarded as a well known Malaysian veteran composer/music producer and has performed around the region as a professional classical pianist as well as all -rounded pianist covering all genres of music. He also sings. Ross has travelled the world performing from Alaska to the Panama Canal, from the Netherlands to New York City and from Russia to Australia and Hawaii.

A Whole New World
Beauty and the Beast
Can You Feel The Love Tonight (duet)
Endless Love
Fields of Gold (duet)
Home (duet)
How Deep Is Your Love (duet)
Islands in the Stream
Love Lift Us Up Where We Belong
Lucky (duet)
My Favourite Things, Edelweiss, Something Good (The Sound of Music)
Quando, Quando
Reflections (duet)
Saving All My Love For You (GLEE version as duet)
Somewhere Out There
Suddenly (from Xanadu)
The Greatest Love of All (duet)
Tonight, I Celebrate My Love
Unforgettable (duet)
When You Wish Upon A Star (duet)
You’ll Be In My Heart (duet)
You’re the One that I want (Grease)
You’ve Got a Friend in Me (duet)