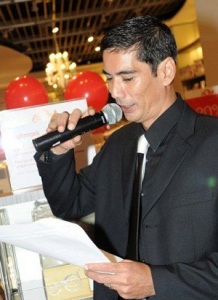 Farouk Khan has been in the entertainment business for more than 25 years and has spent 12 of those years in the “Radio Broadcasting Industry”.

He is considered as one of the most experienced Radio Announcer, Producer, Editor, Scriptwriter, Voice- Over Talent and a Music Programmer.

His radio success comes from being employed by none other than the No.1 radio broadcasting company in Malaysia, AMP Radio Networks which shares its electronic media industry market with the No.1 Satellite TV Service provider “astro”.

Farouk Khan has also delved successfully as a panel emcee, event organizer and consultant for some of the most recognized and reputable event companies in the country during its time.

His level of involvement in the event organizing business, eventually steered him to be one of the most accepted and the most professional “Master of Ceremonies” for various small and big scale events from weddings, annual dinners, product launches, family days, team building activities, right up to hosting high profile nationally organized government events, road shows and various international conventions.

Farouk Khan’s experience over the years also includes being a Disc Jockey in various popular dance clubs in and out of Malaysia.